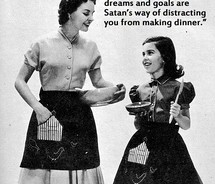 One of the best parts of our 9 to 5 lives in the office has got to be the hour-long lunch which gives us the opportunity to flex our legs a bit and chit chat about almost anything that comes to mind. Work, relationships and frequently current affairs are the topics of conversation in the most incoherent way possible as our small girly group jumps from one subject to other for no particular reason.

Sometimes I wish I was recording our little chats as so many of the issues that we only touch upon are reflective of our angsts and preoccupations as women in society today.

Career aspirations, relationship tribulations, body and fashion consciousness, all find a way in our talks that can vary from the serious to the utmost absurd. How can I pursue a career that I think I deserve in order to be financially independent from partners and parents? What is my place in a household – how do I embrace the ‘feminine’ roles without surrendering to a ‘domestic goddess’ stereotype? What does it mean to feel attractive and desirable without falling into the traps of a consumerist ideology? The F word – feminism – creeps up here and there, as we consciously accept that these preoccupations are commonly shared  between women and have been debated by feminists and non-feminists alike.

And we also have frequent ammunition. In the new year alone, there have been several events that have put women’s issues forward in the news. Miriam O’ Reilly won her ageism case against the BBC (although the sex discrimination case failed), the SKY sexism row made headlines and cost the (SKY) jobs of Richard Keys and Andy Gray and the world of fashion was accused of lying to women.

Anything from bony models pages on a fashion magazine to seeing a Lynx ad about angels falling for Lynx-smelling men can provide us with female images that can heat up a conversation. And recently the predicament in which women find themselves today. My crazy idea was  that’s what Black Swan is all about. I know that this isn’t the sort of thing that comes to mind when watching the film but dig a little deeper and you’ll find some very telling truths. (Warning: may contain spoilers!)

For example, Nina (Natalie Portman) seems to be relatively unsuccessful although she’s working for one of the top ballet companies, she always needs to strive for the spotlight, for the position in the forefront. Her position is just deemed acceptable but not worthy of mention. In striving to earn the top spot, being technically perfect is simply not good enough. She can’t get the role of the Odette unless she can execute it with accuracy and passion. Her passion cannot be simply a passion for the her job and her role; it has to be a sensuality that appeals not only to the audience but to the her male director. But she can’t just be passionate and raw as the black swan, she has to be timid and pure as the white swan, never settling into one role but constantly trying to be in and out of both.

At the same time she has to have a personal life, to promote herself and to live by the acceptable rules of social conduct in New York – drink, flirt, be sexually adventurous, take drugs. Or in other words to be cool (or what is perceived to be cool). Again though that is not enough as she has to feed her mother’s own fantasy and be a good daughter to the woman who supports her the most and who she probably feels she owes the most as well.

No wonder she is mentally unstable, how can one woman fit in so many shoes? Pursuing a top career, being able to change personalities within her role, being sensual and pleasing without shedding timidness entirely, having an electrifying social life and a good relationship with her mother, the poor girl has no chance of getting out of it unharmed (as Beth – Winona Ryder – would probably be able to tell her as well).

Even after she manages to have it all just for one night, the perfect performance, the respect of her mother and her coworkers, the love of the man she was aiming for, the crowd’s approval and her faith in herself, her ideal moment is alas short-lived. For even if she had escaped death, she would have to go back to a life of struggling to attain that perfection, that constant chase of fulfillment and approval.

And aren’t Nina’s troubles echoing with the lives of so many women around the world? Be professional, be creative, be a white swan and then a black one, be a good daughter, be sociable, find a man, do your best to keep him – it’s all so exhausting and all so female.

That is what we sometimes talk about round the lunchtime table, as girls, concerned of what society expects as to be and what we expect of ourselves and then the conversation suddenly turns to moisturising and depilation. To paraphrase Susan Douglas*, our female minds are like a blender (‘in a constant state of roiling suspension’), our identities as women neither logically necessary nor logically impossible (‘always contingent’). But we can live with that.

*Douglas, Susan J. Where the girls are: growing up female with the mass media. New York: Times Books, c1994.